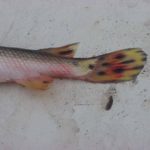 What is Golden Algae?

Golden algae is non-native. It often exists as one specie in a mix of many species inhabiting a water body and cause no obvious problem. However, at times this golden algae blooms in large numbers and release toxins that cause fish kills. Dying fish typically show bleeding of the gills, fins, and scales and behave as if there is an oxygen deletion. Golden alga blooms, however, seldom cause dissolved oxygen depletions. Sometimes but not always, the water has a “golden” color when this happens and thus the common name. P. parvum has not been shown to be toxic to other animals (wildlife, livestock, or humans).

For more information about this golden alga, its distribution in Texas and its impacts see the Texas Parks and Wildlife web site at: http://tpwd.texas.gov

This plant is not native to North America and should not be introduced into new water bodies and should be treated with herbicide when present.